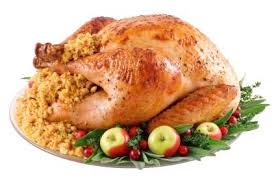 What happened with walnuts? In a previous post I mentioned the “Walnut Incident” and said I would explain it at another time. Well, it’s another time. Many moons ago, my sister Jane decided to try another recipe for turkey stuffing on Thanksgiving. The stuffing she made included WALNUTS, apples and cranberries, along with the more traditional ingredient. Sounds delicious, doesn’t it? The problem was Jane neglected to tell her husband Mark about this plan. Generally speaking, Jane learned the hard way that men like cranberry jelly that slithers out of a can over “real” cranberry sauce and, when it comes to Thanksgiving, DON’T MESS WITH TRADITION, especially Thanksgiving turkey STUFFING. Mark took one bite and didn’t know what he was biting into. He wondered if there were bones in the stuffing or some other inedible objects. When Jane saw the look of horror on Mark’s face, she asked him what was the matter. “What did you do with MY stuffing?” he asked. When Jane told him about the WALNUTS, apples and cranberries, Mark said, under no uncertain terms, “You ruined MY Thanksgiving! All year long I look forward to the stuffing. The stuffing is MY favorite part of the meal and now it’s ruined! You just don’t mess with the traditional Thanksgiving meal! I didn’t know if I was eating bones or peels or what!” Mark had a few other choice words, but you get the idea. 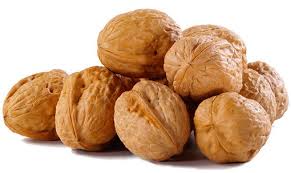 When I first heard Mark’s “Walnut Woes” I thought he was going way over the top; whining about walnuts [“C‘mon man!”]. Jane created this magnificent Thanksgiving feast and all he talked about was walnuts. She did cook the canned corn he liked. I made up my mind then and there to make Mark’s “Walnut Woes” into the “Walnut Wars.” On the Christmas that followed that infamous Thanksgiving, I gave Mark a beautifully wrapped box of …you guessed it…unshelled WALNUTS. During another Christmas Season, I had my friend Pam glue two little eyes on WALNUTS and place them in strategic locations – on the porch step on the way to his car, on his windshield, on the seat of his car, in the mailbox. Wherever Mark went, he found Walnuts with beady little eyes staring at him. You have read about the Christmas Wise Men in my previous blog posts. I must confess I am a bit of a “wise guy” all year round. 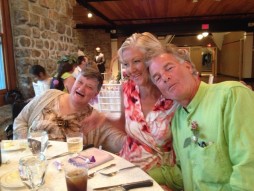 [Lydia, Jane and Mark At Luke and Trish’s Wedding]

As the years have gone by, I have come to understand Mark’s point of view just a little bit better. It is startling to feel something crunchy in your mouth when you expect something to be soft. Jane should have talked to Mark about making the stuffing a new way before going ahead and doing it. In so doing, Jane “respects her husband” [Ephesians 5:33b], especially when it comes to food. Generally speaking, men like their food cooked in the same way, with no surprises. It seems rather boring, but true. As an objective observer [hum hum], a wife who prepares a meal the way her husband likes it is demonstrating her love for him. Also generally speaking, a husband who fixes a household item, which needs “muscle power” when the wife asks him to, within a week or two is the same as saying, “I love you” and he saves himself from the “nagging stage” that has to begin to get anything done. “He who loves his wife loves himself” [Ephesians 5:28b]. [I thought I would share my two suggestions for a happy marriage, out of my many years of observing married people – one for the wife and one for the husband.]

Anyway, Jane and Mark are still married and still in love, and I have stopped giving Mark walnuts for Christmas [I couldn’t find any in the shells. Can you believe it?] This Christmas I got him something far better and vastly more satisfying. First, you need to know that Mark, my nephew Luke, Luke’s father-in-law Tom and I have been in our own football pool for bragging rights.[You can see my “picks sheet” on the bottom right of the photo.]  For some magical mystical [knowing about football stuff and woman‘s intuition] reason, Mark has not won many weeks of the 2014 NFL football picks and I have won the last five out of six weeks, as well as one or two others. I don’t know what comes over me – maybe it’s my competitive nature – but I love to WIN, especially against Mark. When I win, I feel I win for all women sports “enthusiasts” everywhere [okay, maybe just in New England]. One day, as I was thinking of who I bought Christmas gifts for [I forgot I had already bought a gift for Mark and hid it in a very safe place, wherever that was], this idea came to me, followed by my bone-chilling maniacal laugh, which is never a good sign for the person my idea is for.

God created gift bags for people like me but, since I didn’t have one, Jane helped me wrap Mark’s gift. Jane was the one who helped me pick out the first gift I got for Mark and she also forgot about it [we are both over 50]. A word to the wise: If you ever see me with wrapping paper, tape and a pair of scissors, turn around and run – run as fast as you can.
Mark and his boys just came back from target shooting. Thankfully, he went upstairs first and put away his gun before he came downstairs for his gift. With all kidding aside, Mark is a very good sport and both of us have mellowed with age, as you can see by the smiles on our faces. I wouldn’t have given him the book, “Football for Dummies” if only one of us would be laughing. 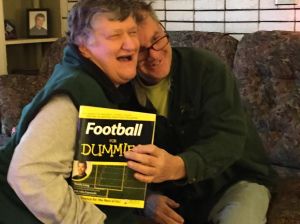 “Above all, keep loving each other earnestly, sins love covers a multitude of sins” [I Peter 4:8; Also see Proverbs 10:12]. 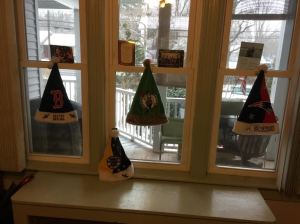 I am going to take a month off from blogging, in order to spend time on another writing project. Hopefully, you will “read all about it” in February. Also if any of you are having trouble with getting the pictures in my posts, scroll down to the bottom of the post and click: lydiag81655. 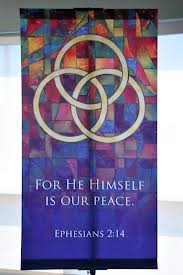 P.S. I finally did find the first gift I bought for Mark [his favorite liqueur with 2 nice glasses]. I gave it to him a few days ago. Knowing Mark, the bottle will last until next Christmas. Jane was the first one to remember I had it somewhere and I was the one who finally found it, hidden away in my coat closet. Getting older is a scary thing. That’s why we need each other. 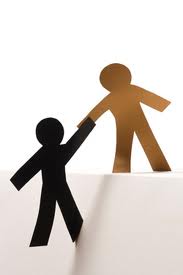 “Two are better than one, because they have a good reward for their toil. For if they fall, one will lift up his fellow…a threefold cord is not quickly broken” [Ecclesiastes 4:9, 12b].